What are the Differences Between a Void and Voidable Contract? 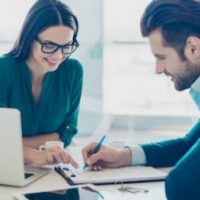 The terms void and voidable are often confused and are sometimes used interchangeably. However, they actually have different meanings, and without knowing the differences, it could lead to legal issues down the line. While void and voidable contracts share some similarities, the differences are major and important to understand. If you need assistance with a contract, you need to speak with a Washington DC business attorney.

What Does Void Mean?

Contracts that are void mean they cannot be enforced by either party. Essentially, it’s a contract that is no longer able to be used, and the courts will look at it like there was never a contract to begin with. One issue that can lead to a contract being void is the subject matter of the contract being illegal in the particular state or throughout the country. Depending on the terms, and what aspect was illegal, one or both parties could be facing criminal charges.

What Does Voidable Mean?

With a voidable contract, one party can be bound by the contract terms while the other party has the right to change their mind. In other words, they can cancel the contract whenever they want. Another situation that could render a contract voidable is mutual mistake or when important material is missing from the contract.

An example of a voidable contract is one involving a minor. Minors can enter into contracts, but they can also decide to breach the terms without legal repercussions. There are other parties who cannot enter into a legally binding contract either, including someone who lacks the mental capacity or is intoxicated or on drugs at the time the contract was drafted.

Main Differences Between Void and Voidable

Contracts that are no longer enforceable become void. If one party uses a tactic like fraud or coercion, the contract will become voidable as well. With a void contract, the contract can’t become valid just by both parties agreeing, as you can’t commit to doing something illegal. Voidable contracts can be made valid if the party who isn’t bound agrees to give up their rights to rescission.

Examples of void contracts could include prostitution or gambling. If someone enters into a contract and is suffering from a serious illness or was mentally incompetent, it would be void because the party lacked legal capacity to enter into a contract.

If you need assistance with drafting a legally enforceable contract or need to know whether an existing one might be void or voidable, you need to speak with a Washington DC business law attorney as soon as possible. Contact Tobin, O’Connor & Ewing at 202-362-5900 to schedule an initial consultation.