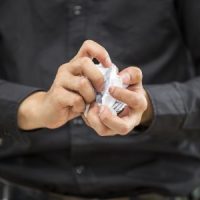 If you reread documents that you wrote many years ago, whether they are personal letters written on paper or archived blog posts from the salad days of Geocities, you will probably immediately notice how much your ideas have changed; you may barely resemble the version of yourself that wrote those old texts.  You don’t have to do anything about the fact that you changed your mind except to continue being the new you; if you once wrote something uncharitable about someone in your life, you might apologize to that person, and they will probably understand that something you said in anger or to get a rise out of people when you were 22 is not a legally binding statement of your intentions.  When you write your will, though, the assumption is that you really mean it.  Making a will official requires considerable formalities, and so does revoking one. If you write a new will to replace your old one, the best way to prevent confusion and conflict in probate court is to physically destroy the old version of the will by burning it or tearing it up.  If a recently deceased family member of yours left the old version of their will lying around after writing a new version, contact a Washington DC probate lawyer.

In 1998, Nadya wrote a will while married to her second husband Malcolm.  Pursuant to this will, the main beneficiary of her estate was Denis, her son from her first marriage. In 2002, while her divorce from Malcolm was pending, Nadya wrote another will, which was similar to the 1998 and also left most of her estate to Denis.

Nadya subsequently married Mevlud, but their relationship was turbulent and they went to court several times because of domestic violence allegations and divorce proceedings, although they remained legally married until Nadya’s death in 2017.  In the last year of her life, Nadya issued a signed document stating that she revoked her 1998 will; she also drew an X across every page of the 1998 will and wrote “revoked” next to her signature on it.  The revocation document did not say anything about the 2002 will.  She also issued a deed stating that she and Mevlud owned the condominium where they lived as tenants by the entirety, which meant that the condo would not become part of her estate upon her death.

During probate, Denis asked the court to administer the 2002 will, but Mevlud argued that, due to the revocation document, Nadya had died intestate.  Eventually, the appeals court ruled that the 2002 version of the will was valid, so Denis inherited most of his late mother’s property.

A probate lawyer can help you if the heirs to an estate disagree over whether the testator legally revoked their will.  Contact Tobin O’Connor Concino P.C. for help today.