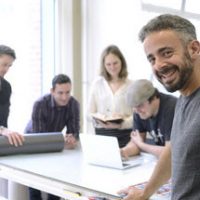 When two friends go into business together, it can start out like a dream come true, but when business disputes arise between them, and can turn into a nightmare in which they both lose money and each other’s friendship. The last two decades have seen countless young entrepreneurs start Internet-based businesses, to the point that the new American dream takes place largely online. With online businesses, as with any business, disputes among partners sometimes end up in the courtroom, and the courts base their decisions on statutes, legal precedent, and the articles of organization of the businesses, meaning that the outcome of the case sometimes depends on the entity type under which the business is registered. If you are involved in a dispute with a business partner, a Maryland business law attorney can help.

Details of the Anybill Case

The company that became Anybill Financial Services started out with two college friends shooting the breeze; in 2001, Daniel Voorhees and Peter Bepler were speculating about how to make an online accounts payable company. Their idea came to fruition when the online financial services industry was in its infancy, and eventually Anybill would count among its clients gigantic companies like BMW, Netflix, and Whole Foods.

As the company’s value increased, Bepler maintained a relatively modest standard of living while Voorhees splurged on multi million-dollar houses in Maryland, Florida, and Washington, D.C. and bought a yacht for $9.5 million, in addition to luxury cars and a private aircraft. By 2013, Bepler became suspicious of where Voorhees had gotten the money for all these extravagant purchases.

When Bepler first confronted Voorhees about the suspicious transactions, Voorhees said that the account in his name was an old one that he had been using for Anybill business since the company’s earliest days. He had meant to change the name on the account but had never had time; he promised to stop using the account for Anybill business. In 2014, however, Voorhees refused to let Bepler see a copy of the company’s tax returns. In 2015, Bepler attempted to get a court to order Voorhees to release the company’s financial statements. Voorhees retaliated by reducing Bepler’s salary by 75 percent.

After the partnership broke up, Bepler filed a lawsuit against Voorhees, alleging that he transferred $30 million dollars, over several transactions, into his bank account and that of his husband Christopher Dorobek, to pay for luxury items for the couple and their family members. The lawsuit also names Dorobek as a defendant. The attorney for the defendants says that Bepler is in the wrong in either case; if his allegations are true, he has failed to protect the interests of Anybill’s shareholders by not voicing his objections sooner. The lawsuit is ongoing, and very few court documents from the case have been released to the public.