Is an Advertisement Considered an Offer? 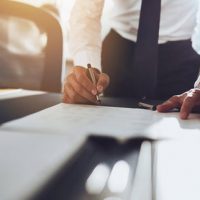 If you’re a new small business owner, the theory of contract law can be terrifying. If you have goods for sale, it’s important to understand how offer and acceptance works, and what role advertisements play in contract law.

What is Construed as Offer and Acceptance?

An offer is an indication by someone expressing their willingness to make a contract without any further negotiations. Contracts are then formed by implied or express consent. It’s said the contract begins once acceptance of an offer has been communicated. This method was established in the 19th century and essentially identifies the minute there is a “meeting of the minds,” or consent. If both parties are not on the same page, or one attempts to mislead the other, then there is not a contract.

In most scenarios, an advertisement is not considered an offer. They are considered an invitation to begin negotiations. The reason for this is because if a contract was formed, no one could ever advertise without fear of being sued. Imagine placing an advertisement for delectable tomatoes. Someone comes in and says they gladly accept your offer to purchase these delectable tomatoes. And, follows up with the statement that if they are not delectable, they plan to sue.

Although advertisements are not generally considered offers, it doesn’t mean a business can make any claims they want about a project. Advertisements must be true, or at least be reasonably based on fact. You are also prohibited from using bait and switch tactics to entice a customer to purchase something but then try to get them to purchase a different product instead.

You may hear the term invitation to treat in conjunction with advertisements. An invitation to treat essentially means you’re invited to make an offer. That is what an advertisement in the newspaper typically is. The person placing the advertisement is not making an offer, they are inviting people to come in and make an offer to purchase. Using the earlier example with the tomatoes, a customer can come in and offer to buy the delectable tomatoes at a specified price. The store can then accept or reject that offer.

Other examples of an invitation to treat include:

If you are a small business owner and need assistance with contracts and other legal matters related to your business, it’s good to meet with a skilled Washington DC business litigation lawyer. The team at Tobin O’Connor & Ewing specializes in business litigation, including helping small businesses get set up and deal with legal issues that arise. Contact our office today to set up a consultation.