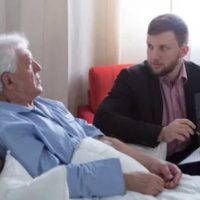 Most people’s wills do not contain major surprises.  Even if the deceased person does not show their will to any family members while they are alive, they usually leave their estate to their closest relatives.  If someone else other than a spouse, son, daughter, sibling, niece, or nephew is to inherit a large share of the decedent’s estate, it is usually obvious to everyone that the distant relative or close friend played a major role in the decedent’s life.  When someone gets close to a terminally ill person or a mentally fragile elderly person, though, family members rightfully get suspicious.  There are unscrupulous people who pressure vulnerable seniors to sign a new version of the will, one that leaves substantial assets to the new companion.  In legal terms, this is called undue influence.  If you suspect that undue influence was a factor in your recently deceased relative’s will, a Maryland probate lawyer can help you challenge the will.

From his birth in 1934 until his death in 2010, Kenneth Green spent almost his entire life on his family’s farm in Lonaconing, Maryland.  He remained on the farm with his parents even after his brother Albert moved to West Virginia and raised a family.  After Kenneth and Albert’s mother died, their mother moved to West Virginia with Albert.  After she died in 1995, Albert moved to Kentucky to be closer to his sons.  Meanwhile Kenneth, who never married or had children, remained on the family farm, taking care of the cattle.

Kenneth worked for the Westvaco stationery company for decades, during which time he formed a close relationship with his co-worker Betty McClintock, a widowed mother of four.  Although they never married or cohabited, they were life partners from the late 1980s until Kenneth’s death.  In 2003, Kenneth wrote a will designating Betty as the beneficiary of his estate.

In 2009, Andrew Green, who is Albert’s son and Kenneth’s nephew, insisted on taking Kenneth with him to Kentucky to care for him during his final illness.  While in Kentucky, Kenneth signed a new will that named Andrew as the personal representative of his estate and a major beneficiary of his assets.  When Andrew opened the estate for probate, Betty challenged the will.  She alleged undue influence and argued that Kenneth could not have meaningfully consented to the change in his will, because he was terminally ill and taking high doses of opioids for pain management.  Another complicating factor in this dispute was that Kenneth and Albert’s mother had died without a will, and there had been a major dispute between Kenneth and Albert over hre estate, specifically, over ownership of the farm.  In the end, the court recognized the 2003 version of Kenneth’s will, with Betty as the beneficiary.

If your friend or partner named you as a beneficiary or representative of their estate, the court will honor their wishes, even if you are not a blood relative.  Contact the Washington DC probate lawyers at Tobin, O’Connor & Ewing for help today.