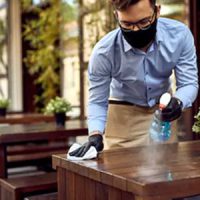 After what feels like an eternity, masks are optional in the District of Columbia, and in-person dining is back in full swing.  Restaurant owners and their employees are eager to get back to work, and customers are more than happy to dine in, but the financial struggles that the pandemic exacerbated continue to linger.  Some restaurants have undergone a metamorphosis during the pandemic and have found new ways to operate that will enable them to save on costs, work more efficiently, and expect the unexpected.  No matter where you are in your restaurant’s reemergence after the pandemic-era shutdowns, a Washington DC small business lawyer can help you come out stronger than you were before.

The Troubled Afterlife of the Eighteenth Street Lounge

Farid Nouri opened the Eighteenth Street Lounge in 1995, and for 25 years, it was part of Adams Morgan’s club scene, always teeming with club goers and thumping with music on Friday and Saturday nights.  It boasted a different style of music on every floor, and was a destination for DJs from Washington DC and elsewhere.  In 2020, the Eighteenth Street Lounge went the way of so many entertainment venues; it terminated its lease after failure to reach an agreement with its landlord, Douglas Development, about the terms of a lease that would need to get the venue through pandemic-era uncertainty.

A Washington DC business dispute lawyer can help you if you are running into obstacles related to reopening your restaurant or entertainment venue after the COVID-19 pandemic.  Contact Tobin O’Connor Concino P.C. for help with your case.