Breach Of Contract Disputes Between Commercial Tenants And Their Landlords 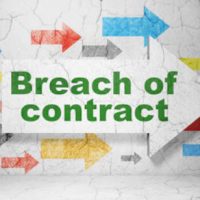 Disputes with landlords over poorly maintained rental properties are stressful.  When you are a tenant of a residential property, your frustration about repairs your landlord failed to make can escalate quickly, because every time you walk past the water-damaged living room wall or try to operate the defective faucets in the kitchen or bathroom, there is another reminder of your landlord’s failure to keep the property in good condition.  Disputes between landlords and commercial tenants bring their own set of stresses, though.  Specifically, the financial losses involved are bigger.  Commercial tenants pay higher prices in rent, and the landlord’s failure to maintain the property harms the tenant’s business, making it more difficult to pay rent, cheating a scenario where each party in the dispute blames the other.  If you are involved in a dispute with the owner of the building where your business operates, contact a Washington DC business litigation lawyer.

AAC HP Realty bought the Harborplace shopping center in Baltimore in 2012, taking over the leases with its tenants from the previous owner.  One of the tenants was a Bubba Gump Shrimp Co. restaurant location which had been operating at Harborplace for about a year.  Many commercial real estate leases include a separate charge for common area maintenance, but the Harborplace lease included common area maintenance as an operating expense and included it in the rent amount.

Almost as soon as AAC took over the lease, the tenant began complaining about poor conditions in the common area.  At trial Bubba Gump presented images of the common areas at Harborplace which showed leaking pipes, chipped and peeling paint, hanging wires, bathrooms that had gone a long time without being cleaned, non-functioning escalators, rodent infestations, rust on the metal stairs, and trash piling up in the planters.

After a series of complaints, Bubba Gump asked AAC to reduce its rent, so that it would not be paying for common area maintenance that had not been taking place.  AAC agreed to a temporary three-month reduction in rent in March 2015, but the condition of the common areas did not improve.  Bubba Gump withheld rent payments from the fall of 2015 until September 2016, when it made up for all the missed payments.  It filed a lawsuit against AAC in November 2016.  The court ordered AAC to refund Bubba Gump just over a million dollars, which represented 20 percent of the rent Bubba Gump had paid since the beginning of the lease.  The court determined that this was the percentage of the rent money that should have gone to the maintenance of common areas.

A business dispute lawyer can help you if you are having a contract dispute with the owner of the building where your business leases a space, whether it is over common area damage or some other issue.  Contact Tobin O’Connor Concino P.C. for a consultation.